Born in Hampstead on February 1 1877, Dunhill’s name lives on as the author of Chamber Music: A Treatise for Students, a pioneering work on the subject published in 1911. Dunhill studied at the Royal College of Music 1893 – 97 then spent the years from 1899 to 1908 as Assistant Music Master at Eton, concurrently teaching harmony and counterpoint at the RCM where he returned later in his life as a professor in 1942. He composed music for the stage, the ballets Dick Whittington (1935) and Gallimaufry (premiered in Hamburg 1937). Three light operas from 1925 and 1933 – The Enchanted Garden, Happy Families and the best known and most successful of the three Tantivy Towers. He also scored a Symphony, in A Major in 1922 and also at least 5 works were premiered at the Henry Wood Proms. Dunhill’s piano music was a fruitful source for the Associated Board set pieces (as I can well testify!) and his books of graded studies became well known to young players. Solo songs, Quintets, Choral works and his work as a teacher and administrator kept Dunhill busy although he still found time to keep a day to day diary of everything he did. Indeed, his son – David, has been able to compile a full and gripping account of his father’s life from these notes. Even though much of Dunhill’s music remains unpublished and inaccessible he played a fundamental role in the music life of this country for more than four decades and we should be inspired by the achievements of this composer who led such a fulfilling life.

Dunhill married Molly Arnold, great-great granddaughter of the famous Dr Thomas Arnold, in 1914. They had two sons – Robin b.1915 and David b.1917 and a daughter, Barbara b.1921. Molly sadly died in 1929. He brought up his three young children with the help of Wendy Moon, a remarkable nanny who was with the family for 18 years. Dunhill met Isobel Featonby, a piano teacher, at an examination in Scunthorpe, and they married soon after in 1942. She was 38, he already 65, they spent a wonderfully happy four years together.
Thomas F Dunhill died suddenly at Scunthorpe on March 13 1946 and his grave, the headstone is pictured below, may be found in the Churchyard at St Bartholomew’s Church, Appleby. 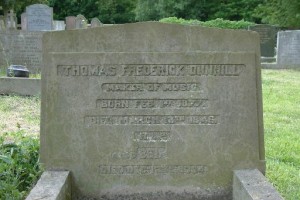 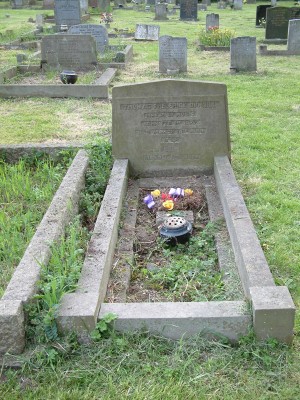