APPLEBY, a pleasant village, on the Roman Road from Lincoln to Winteringham, 7 miles N. by W. of Brigg, and 2½ miles S. of Winterton, has in its parish 607 souls, and 6164 acres of land, including the scattered farms, commons, and plantations of High and Low Santon andRaventhorpe, situated on a sandy ridge and declivity of the Cliff, from 1½ to 4 miles S. S. W. of the village; and a long tract of fertile marshes or cars, on the west side of the river Ancholme. On the western side of the parish, about Santon, a light blowing sand prevails; but some of the most sterile parts are covered with thriving plantations. Charles Winn, Esq., of Nostell Priory, near Wakefield, who served the office of high sheriff of Lincolnshire in 1828, is lord of the manor, and owner of nearly all the soil; the rest belongs to the Earl of Yarborough. Appleby Hall, a substantial mansion, enlarged about the year 1822, and again in 1862, and commanding extensive views of the Wolds, is the property of Charles Winn, Esq., and is occupied by his son Rowland Winn, Esq., M.P. for the North Division of Lincolnshire. A pleasure fair is held in the village on June 10 th. Among the sands of Santon was a Roman Pottery, of which remains of the furnace and numerous fragments of urns and pots, together with several coins, a large brass cross, &c., were found some years ago. Near the Roman road was a Julian Bower, of which there were distinct traces til the middle of last century. On the east side of the road, about a mile south of Appleby, isThornholm, now only a farm, where there was a Priory of Augustine canons, founded by King Stephen and valued at £155. 19s. 6d., in 1538, when it was dissolved and granted to Charles, Duke of Suffolk. The foundations of this monastery may still be traced. The parish Church (St. Bartholomew), which consists of nave, aisles, a fine large chancel with decorated roof, and a tower with six bells, is a handsome stone structure, which was mostly rebuilt in 1820, and with more attention to Gothic taste than was usual at that date. The walls were, however, in accordance with the custom of the age, externally cased with cement, which was removed in 1870, greatly to the improvement of the appearance of the building. It contains 9 stained glass windows, the gift of the present vicar, and which have pleasing Flamboyant tracery, copied from ancient examples. The east window of the chancel is the work of Mr. J. B. Capronnier, of Brussels, and exhibits in the centre light a representation of the Crucifixion, and in the side lights the Offering of Isaac and the Lifting up of the Brazen Serpent in the Wilderness. The side windows are by Wailes, of Newcastle, and illustrate some of the ordinances and offices of the Christian Church, and other subjects. The organ, built in 1859, by Messrs. Forster and Andrews, of Hull, was paid for by subscription. The pulpit and communion rails are ornamented with some richly carved oak panels, &c., of ancient workmanship, representing events in the Life of Joseph, and said to have been executed by ‘Antony of Trent.’ An altar-tomb, formally surmounted by a canopied niche, contains rich tracery, but has been robbed of its brasses. The vicarage, valued in K.B. at £10. 4s., and now at £225, is in the gift of Charles Winn, Esq., and incumbency of the Rev. John Edward Cross, M.A., J.P., who has 9 acres of glebe, a tithe rent-charge £210, and a good vicarage house erected in 1849, and enlarged in 1855. The parish School, built by Charles Winn, Esq., in 1850, is attended by 100 scholars, and is supported by the children’s weekly pence and subscriptions. 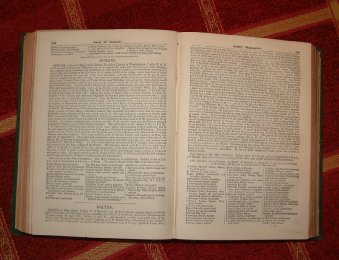 POST OFFICE at Mr. John Thompson’s. Mrs. Mary Thompson is postmistress. Letters arrive at 9.30 a.m., and are despatched at 4.30 p.m., via Brigg. The nearest Money Order Office is at Winterton.